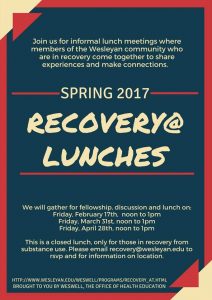 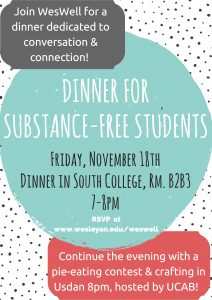 The last of the three drug panels inspired by the Molly incident and arrests will take place April 28th, 8PM, in Shanklin 107. This panel focuses on regional and national policy, and panelists are very signficant people in the field:

Ethan Nadelmann, founder and executive director of the Drug Policy Alliance, the leading organization in the United States promoting alternatives to the war on drugs. Described by Rolling Stone as “the point man” for drug policy reform efforts and “the real drug czar,” Nadelmann is widely regarded as the outstanding proponent of drug policy reform both in the United States and abroad.

Susan O’Connor, Program Director of Phoenix House Outpatient Services in Springfield, MA. O’Connor is the author of a widely-read piece on Wesleyan, “Missing the Point with Molly” http://www.phoenixhouse.org/news-and-views/our-perspectives/missing-the-point-with-molly/?utm_source=t.co&utm_medium=tweet&utm_campaign=social.

Mike Lawlor, Under Secretary for Criminal Justice Policy and Planning. Lawlor is among the most influential members of Governor Malloy’s staff regarding drug policies in Connecticut.

Counseling and Psychological Services (CAPS) is joining with the Muslim Student Association and Active Minds to bring Melody Moezzi for a talk next Tuesday April 7th. Melody is a 2001 Wesleyan grad, and she does a lot of speaking and activism around stigma reduction. she wrote a book called War on Error: Real Stories of American Muslims and her new memoir is called Haldol and Hyacinths: A Bipolar Life.” She is really excited to come to Wes to speak about living with mental illness, cultural barriers to help-seeking, and living with stigma.

Her talk will take place at 7 PM on Tuesday April 7th in the Daniel Family Commons. Copies of her new book will be available, and we will have light refreshments.

Heal in the company of others:
A support group for female identified survivors of sexual assault will be held on Tuesdays beginning September 23rd – December 2nd from 5:30-6:45PM. Meetings will follow an open support group format and participants determine group topics each week.
Contact Alysha B. Warren, LPC, Therapist/Sexual Violence Resource Coordinator, to join and for more information. Reference “Tuesday Support Group” in the subject line. Contact Alysha if you’re interested in forming a male identified survivors support group.
The deadline to sign-up Thursday, September 18th.